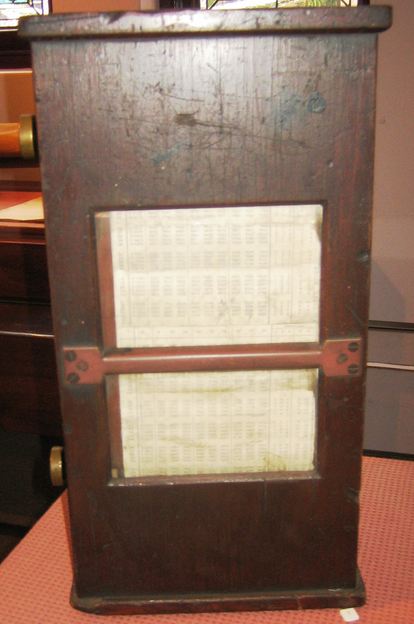 What is this mystery object?

It was a teaching aid at Sydney Technical College (STC).

Sir Henry Barraclough, former Physics and Engineering teacher at STC, published a book connected to this object. The book is held in the TAFE History Collection. 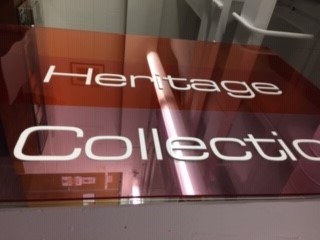 "A Proud Past - A Dynamic Future"

As we celebrate more than 137 years of vocational education and training in New South Wales, catch a glimpse of TAFE NSW history with objects and artefacts used in teaching and learning on display in the Library. 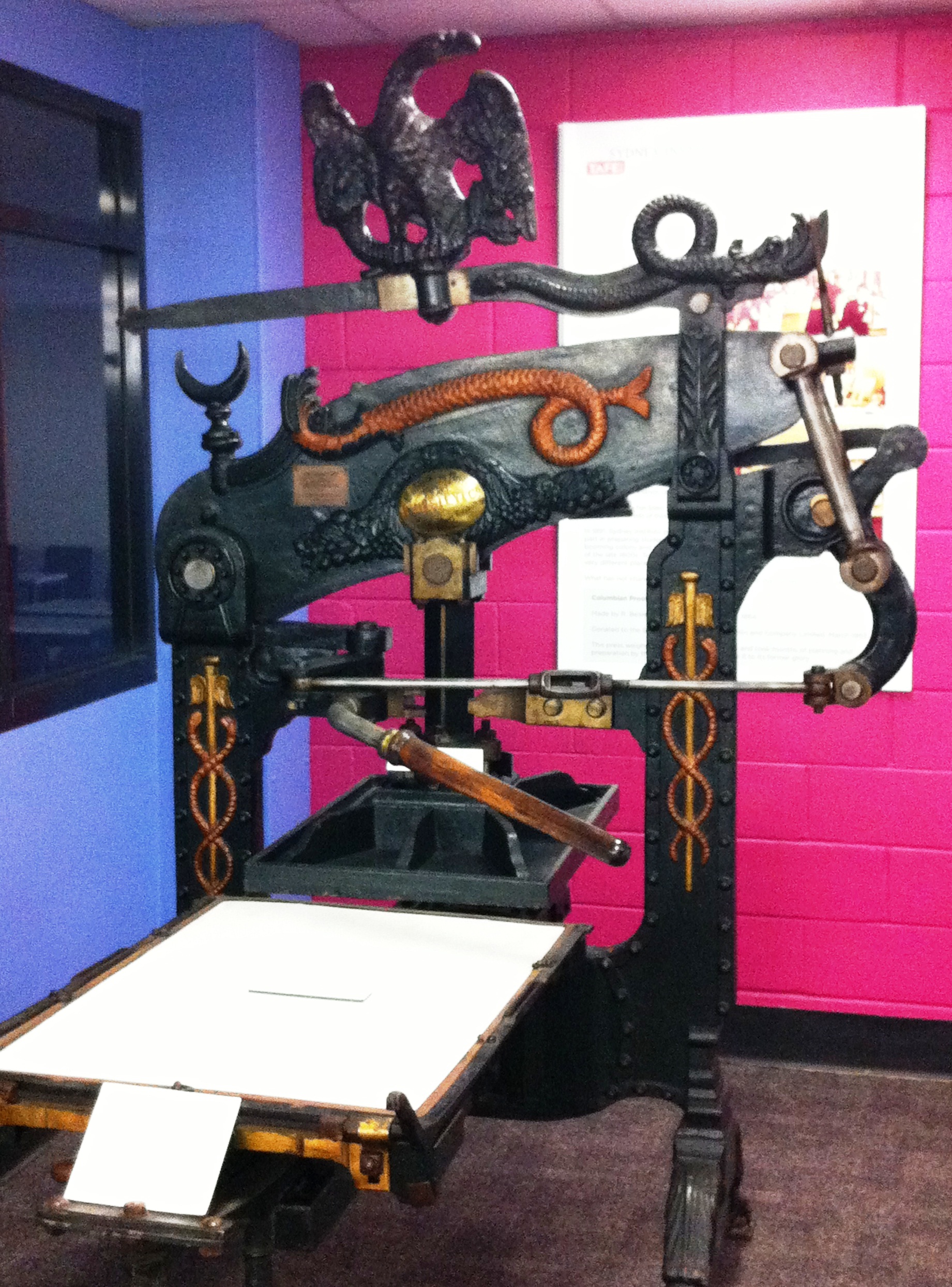 This printing machine is an ornate Columbian Proof Press from 1864. Note the giant eagle decoration on top of the lever - it acts as a counter weight.

Did you know TAFE NSW Ultimo College was the birthplace of top educational institutions and a museum? 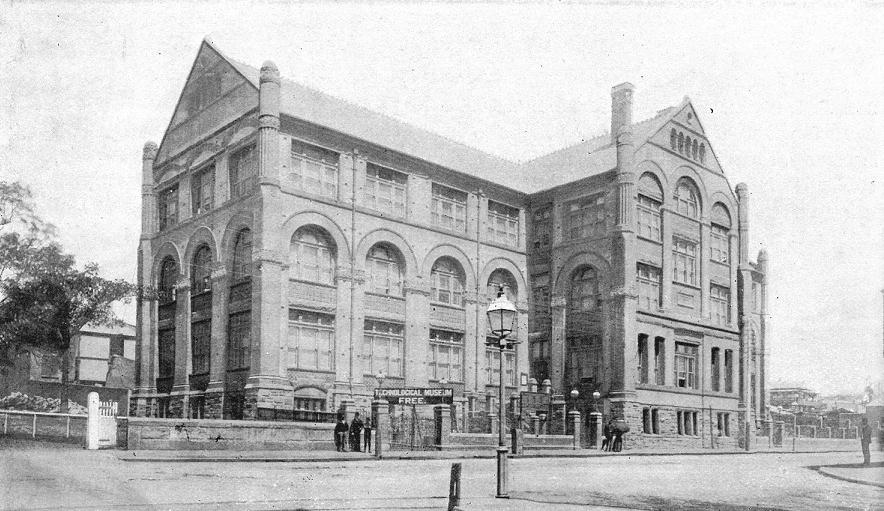 Built in 1892, the Technological Museum's mission was to educate the public on the changing world around them and also it was a teaching aid for technical education classes.

In 1945, it was renamed the Museum of Technology and Applied Science and it later moved to the old Ultimo Power Station on Harris Street, now known as the Powerhouse Museum (a branch of the Museum of Applied Arts and Sciences) 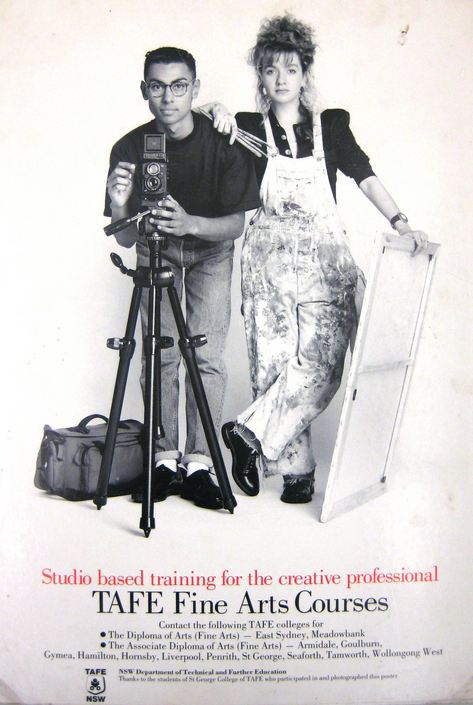 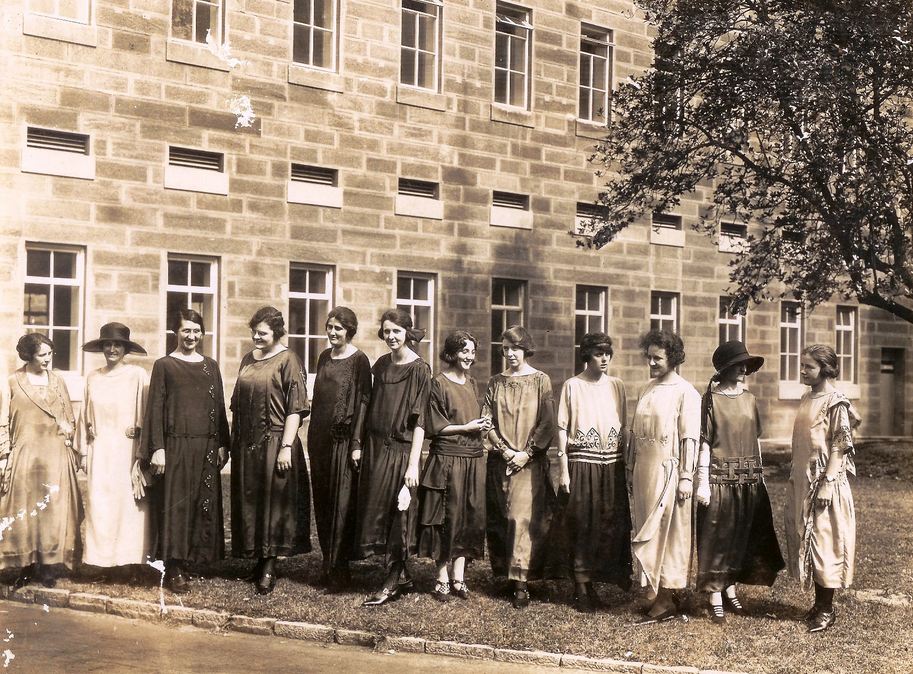 At the National Art School, there have been many talented students and teachers, including Rayner Hoff (head teacher), William Dobell (teacher), Margaret Olley (student) and others far too many to mention here. Between 1944 and 1951, some students came to the College to study art through the Commonwealth Reconstruction Training Scheme. They were ex-service personnel who went on to become well known artists and teachers, such as Tony Tuckson, Klaus Freideberger, Robert Klippel and Tom Thompson.

A notable Australian artist, Tom Thompson was a student in 1947 and gained his honours diploma and College Medal in 1950. Well known for his mural paintings, Thompson returned as a teacher and head teacher from 1955 to 1976. The TAFE NSW Heritage Collection holds published material, correspondence as well as the mural painting called 'Acquiring the Merino'.

Below is a selection of items from the TAFE NSW Heritage Collection and external links. 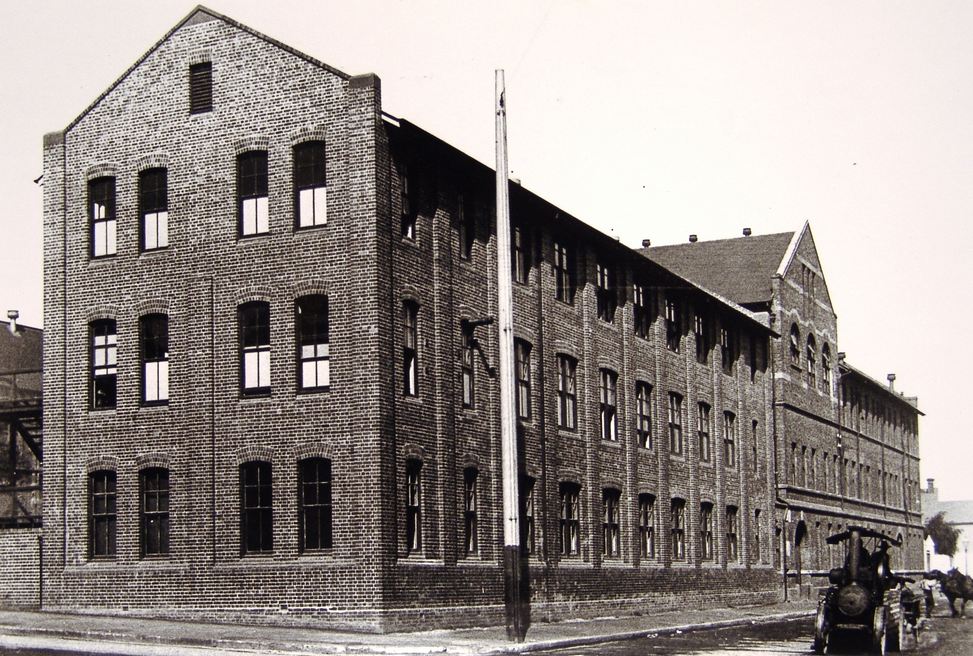 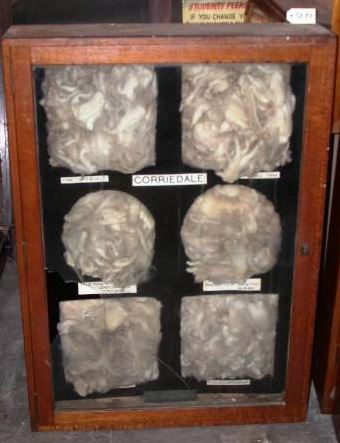 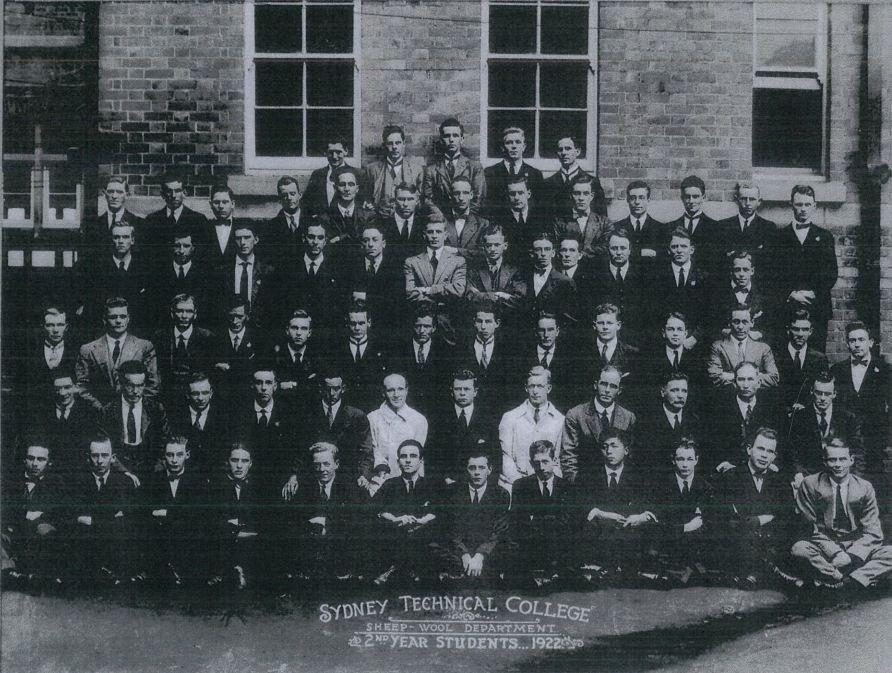 During the 19th and mid-20th centuries, the sheep and wool industry was very important to the Australian economy because wool was a major export product. The growth in wool production required training of many skilled workers in all aspects of the business, such as training in wool classing, wool sorting and buying and selling wool. The Department of Sheep and Wool at Sydney Technical College was established in 1891 and was one of the original twenty teaching departments. A purpose-built Sheep and Wool Building (Building H) was erected in 1910 on the corner of Mary Ann Street and Jones Street (now Jones Street Mall), Ultimo.

The importance of the wool industry to the colony was evident at the Technological Museum. The main feature of its many collections was the extensive wool section. It contained different types of wool from across Australia and overseas. As noted in the TAFE Handbook of 1896, the Technological Museum was not only a Museum for the public, it was also a teaching aid for technical education classes at the College. For example, the Museum was able to provide wool-related resources to the classrooms for the purpose of instruction. The TAFE NSW Heritage Collection holds a large number of display cases containing wool samples and other related items. 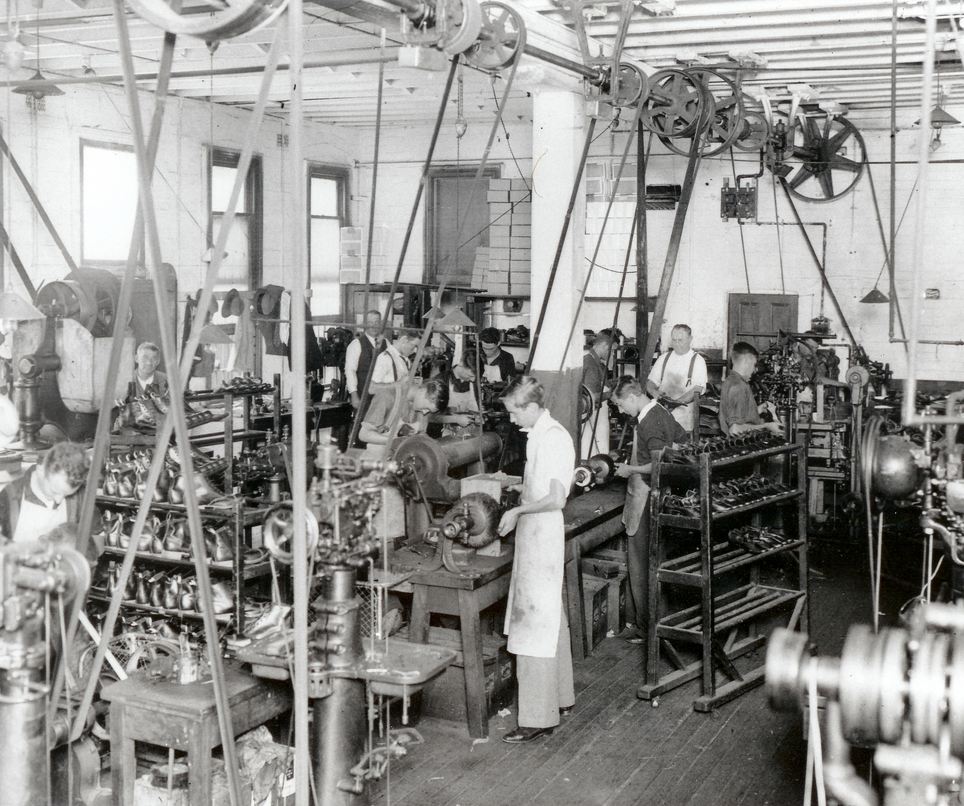 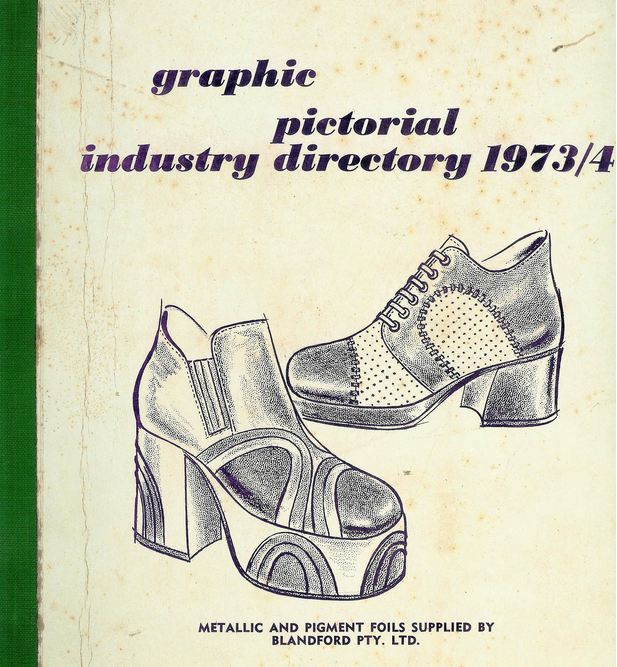 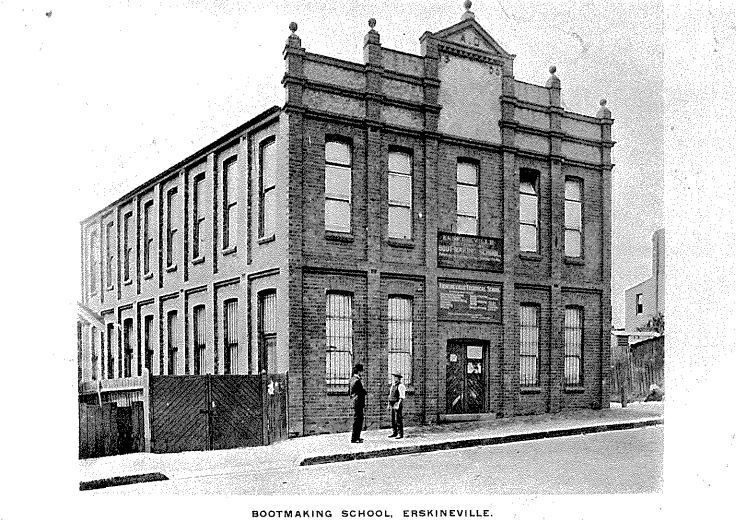 Established by Sydney Technical College as an annexe, the School of Bootmaking opened in 1908, although classes began in 1906. The Bootmaking School was located in the Sydney suburb of Erskineville, opposite the railway station in a former boot factory and was fitted out with modern equipment and machinery.

During World War I, the Erskineville Bootmaking School operated as a factory-school making military boots for the government. It was also involved in training returned servicemen under the Commonwealth Repatriation Training Scheme. In the Great Depression, day emergency classes were set up at the School to train unemployed people.

In 1940, the renamed Boot and Shoe Trade School (later known as the School of Footwear) moved to Ultimo College in a new building (Building J) designed by E. H. Rembert, the Government Architect.

The TAFE NSW Heritage Collection holds a small collection of footwear and other related objects from the School of Footwear. Watch our Heritage Prezi for more historical images.

Below is a selection of objects from the TAFE NSW Heritage Collection and external links. More information may be found by clicking the link or image. 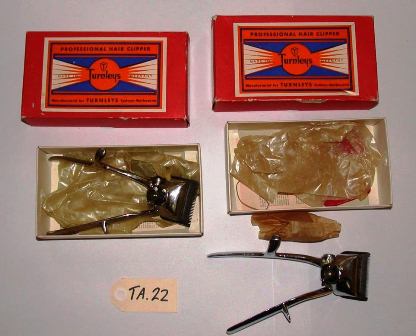 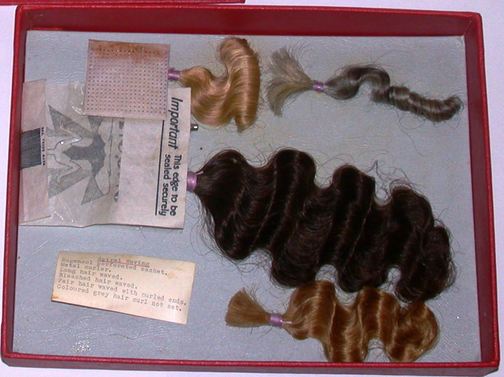 Hairdressing was offered as a TAFE course in 1951 following amendments to the Factories and Shops Act (1950). These legislative changes led to the Department of Technical Education establishing and conducting compulsory men’s and women’s hairdressing classes for apprentices through Sydney Technical College.

As hairdressing enrolments increased during the late 1950s, classrooms were becoming overcrowded and Turner Hall (Building B) was converted for use by the Hairdressing classes. From 1985, the School of Hairdressing and Beauty Therapy has been situated in the Marcus Clark Building (Building W), Railway Square. Watch our Heritage Prezi for more historical images.

Below is a selection of objects from the TAFE NSW Heritage Collections. More information may be found by clicking the link or image. 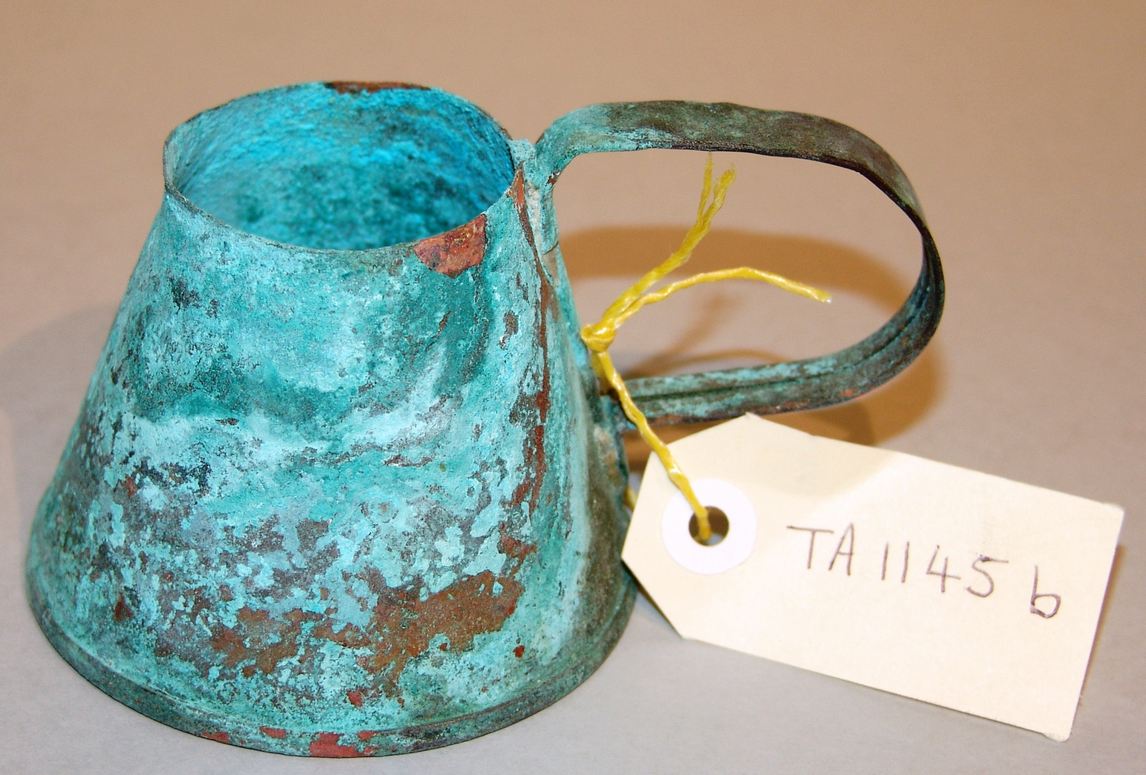 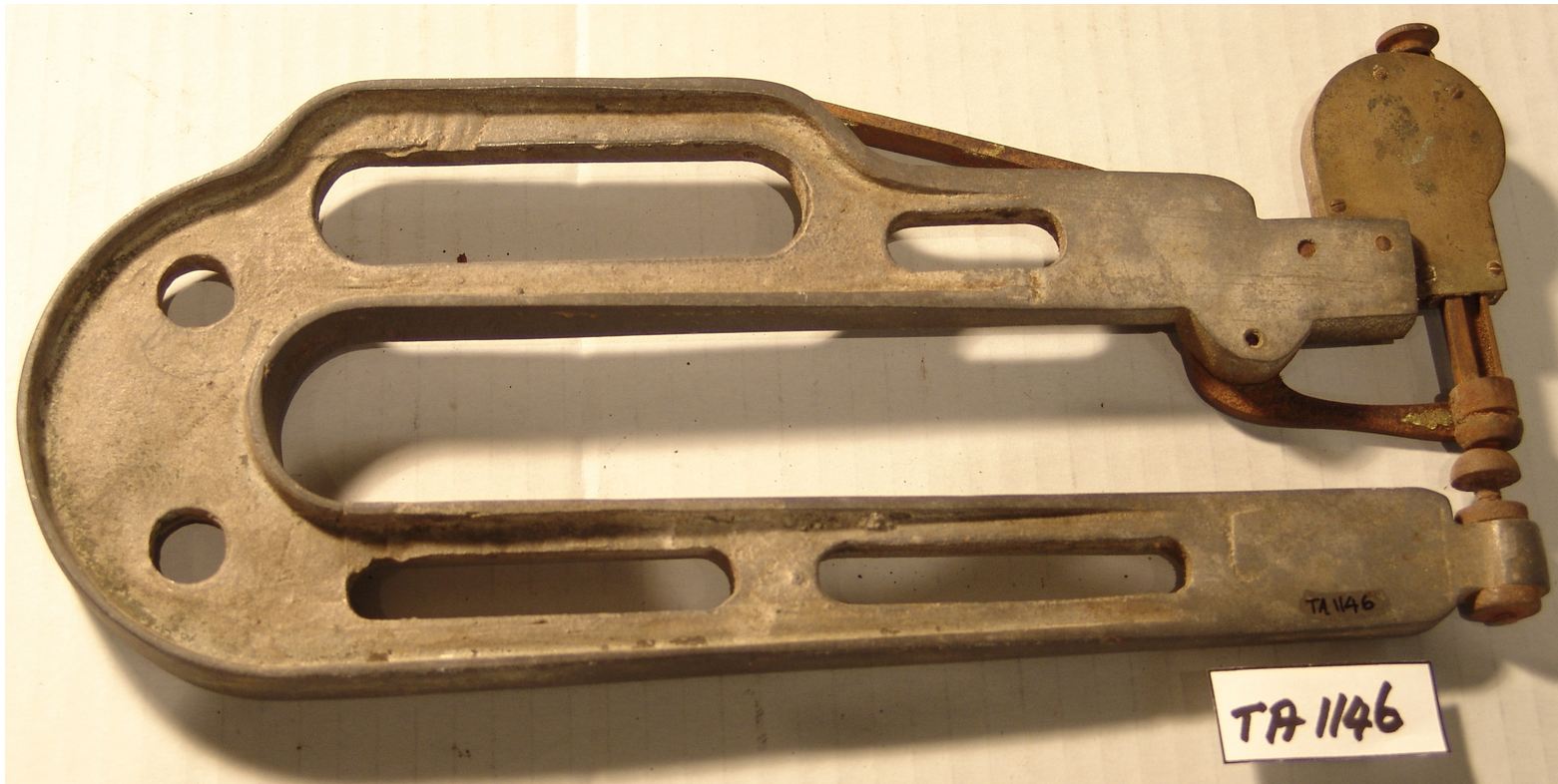 One of the many annexes attached to Sydney Technical College, the Waterloo Tanning School was located on the corner of John and Cope Streets, Waterloo. The Tanning School was originally situated in Circular Quay and moved to Waterloo in 1917 because the growth of the tanning industry was concentrated in South Sydney. The School had a reputation for high quality work and training due to the expertise of staff and support from industry and professional associations. The School contributed to the war effort during World War II in the manufacture of clothing for service personnel across all branches of the arrmed forces deployed in Europe and Pacific.

Below is a selection of objects from the TAFE NSW Heritage Collections and external links. More information may be found by clicking the link or image. 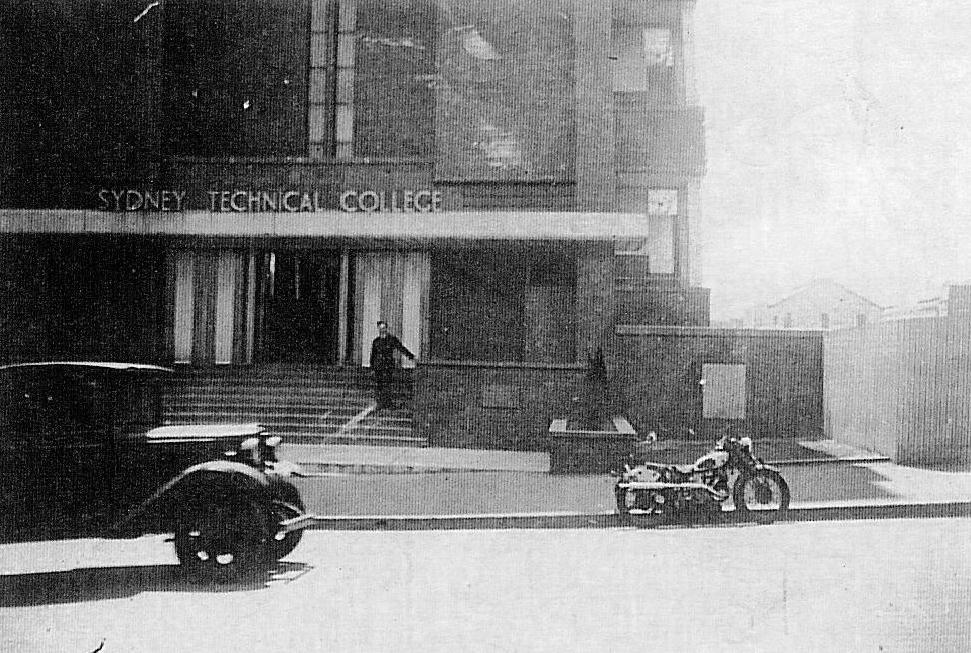 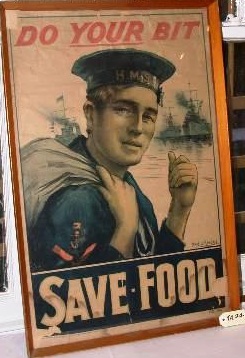 Sydney Technical College and TAFE NSW have a proud history of association with the armed forces. During and after World War I, Sydney Technical College contributed to the war effort in many ways : the School of Bootmaking produced footwear for the military and returned servicemen were trained under the Commonwealth Repatriation Training Scheme.

Below is a selection of objects from the TAFE NSW Heritage Collection. 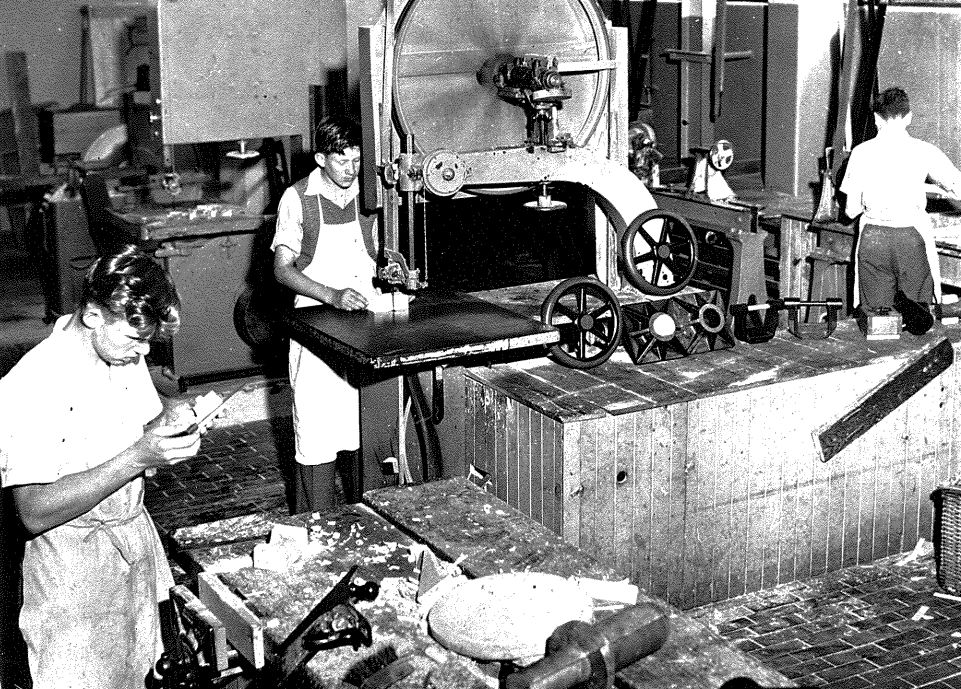 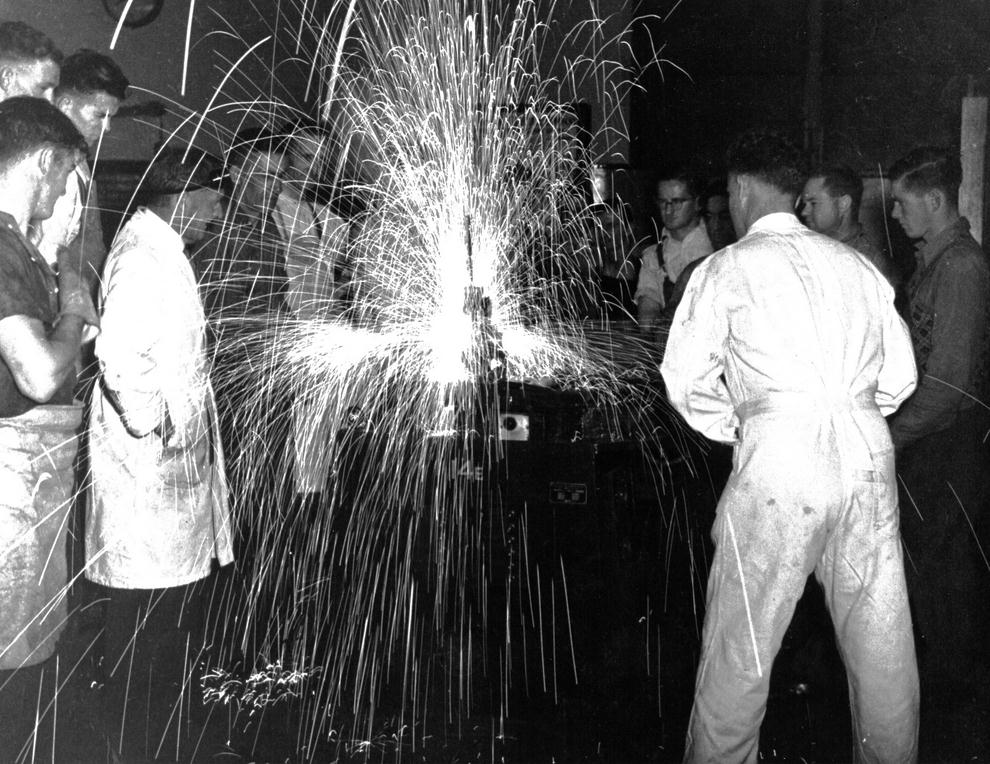 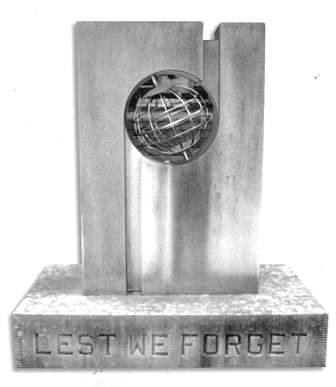 This war memorial is dedicated to technical education staff and students who either gave their lives in, or returned from World War I, World War II, Korean War and Vietnam War.

The design model was made by Carmel Federico, a student in the Architectural Draftmen's Certificate Course at Sydney Institute of Technology, 1982.

The war memorial is situated on the lawn, near the Harris Street entrance, between Building D and The Muse. View map of campus.

TAFE NSW Ultimo College conducts Commemorative Services for ANZAC Day 25 April and Remembrance Day 11 November at this site. For further details, contact us by phone on 131 601 or enquire online prior to these dates. 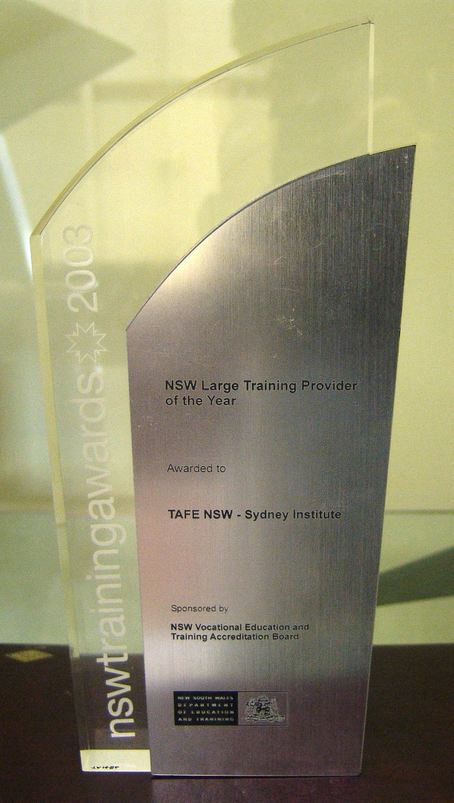 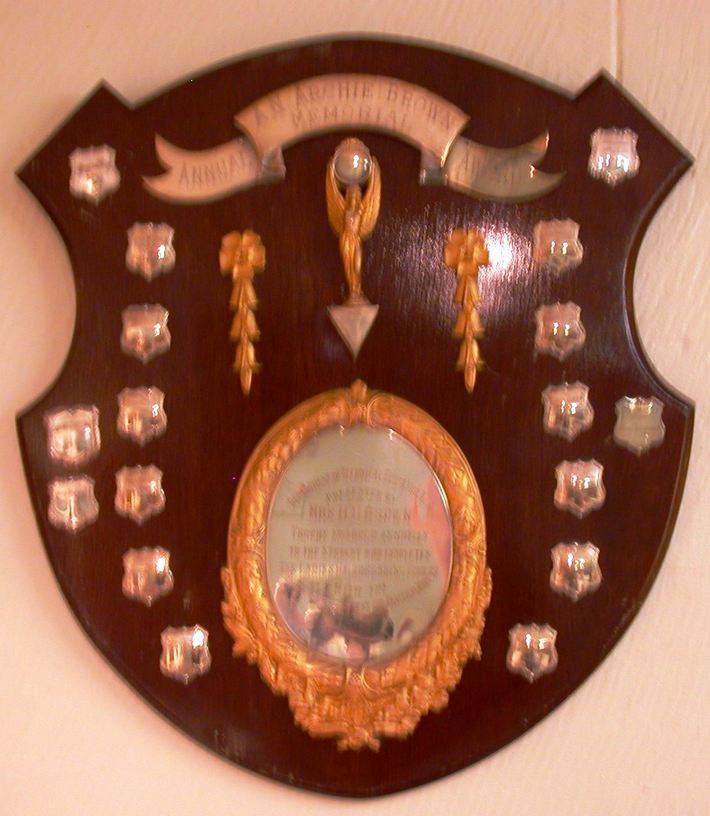 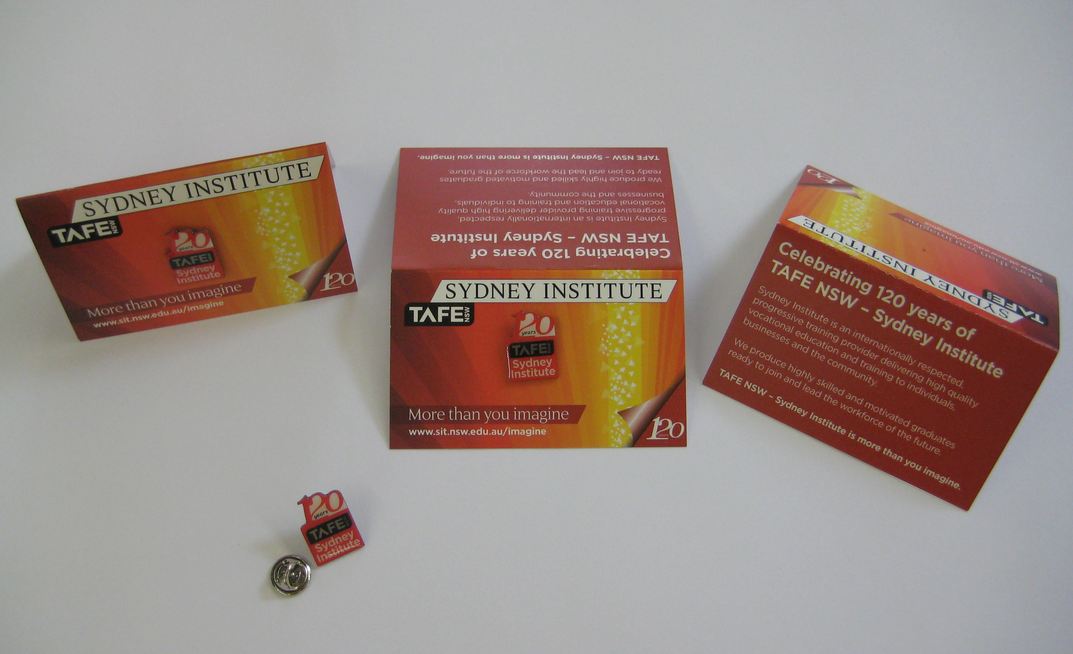 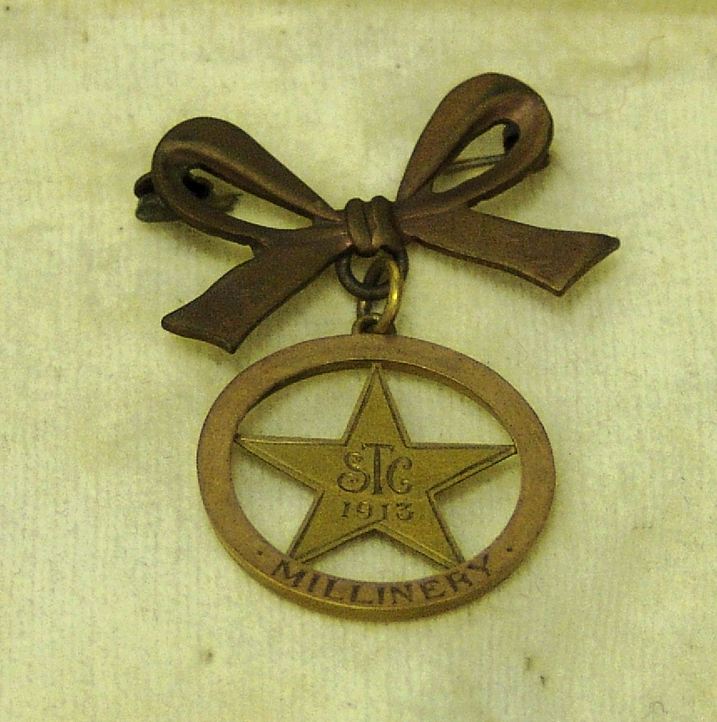 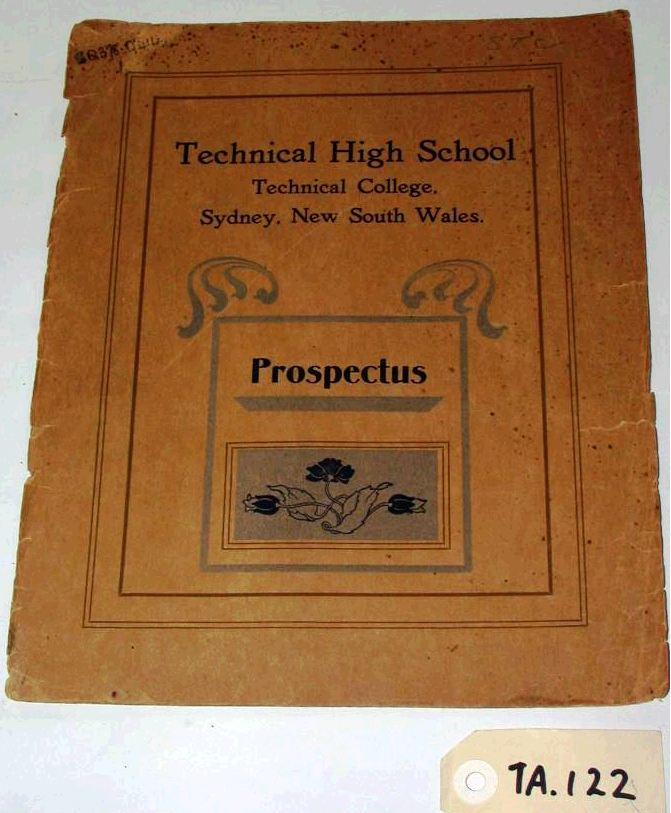 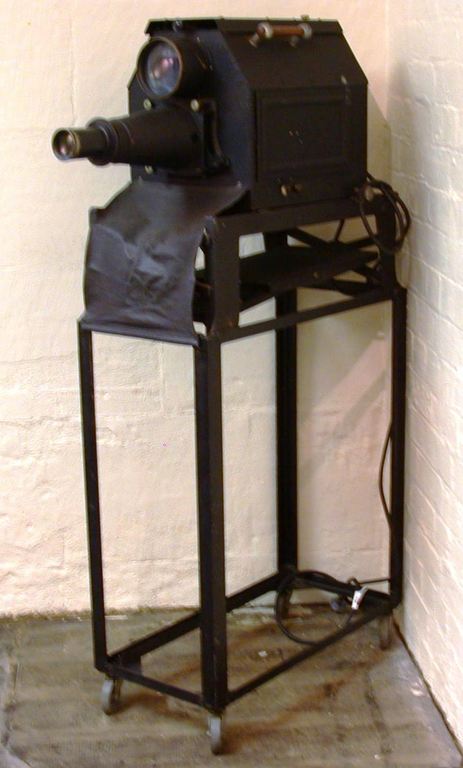 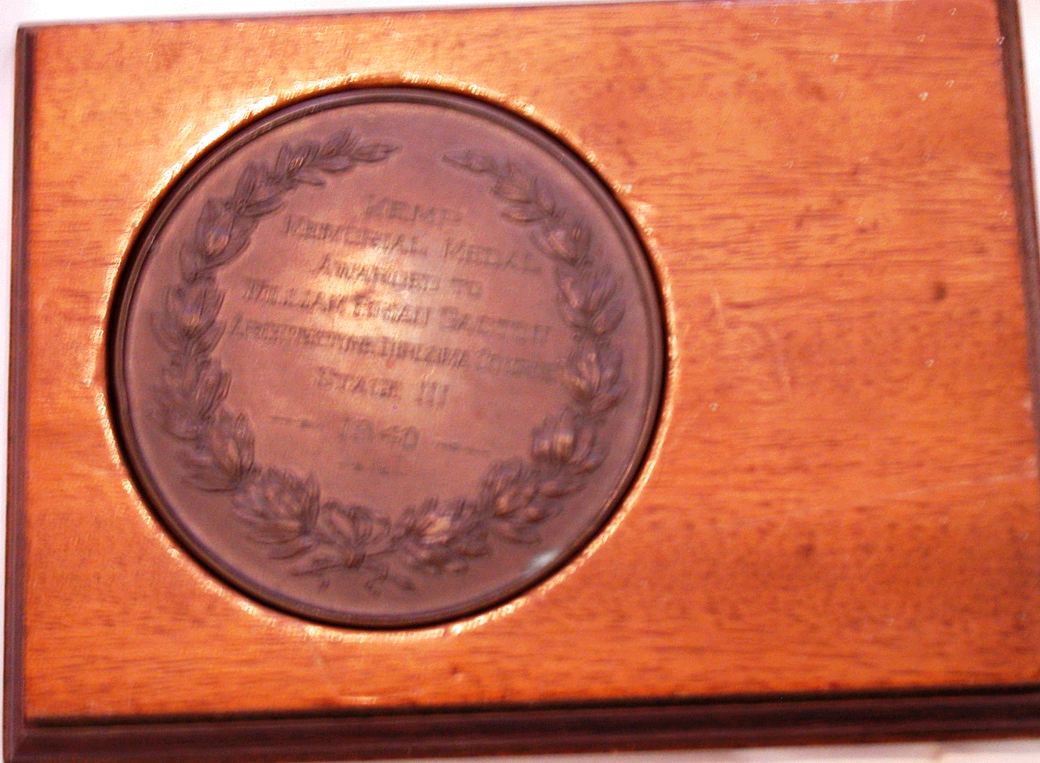 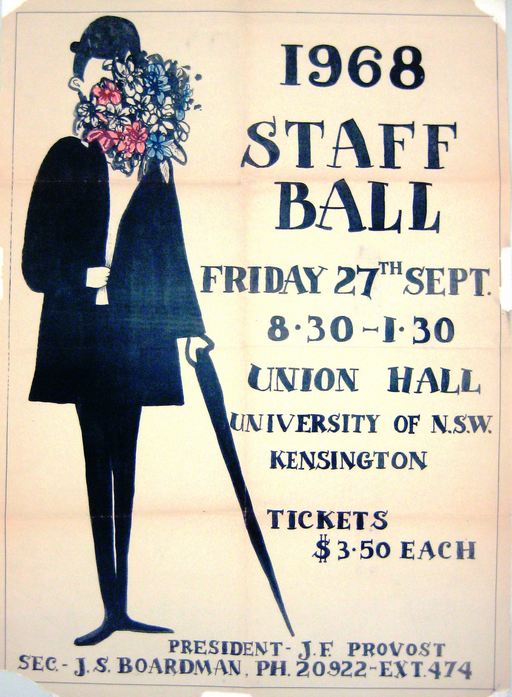 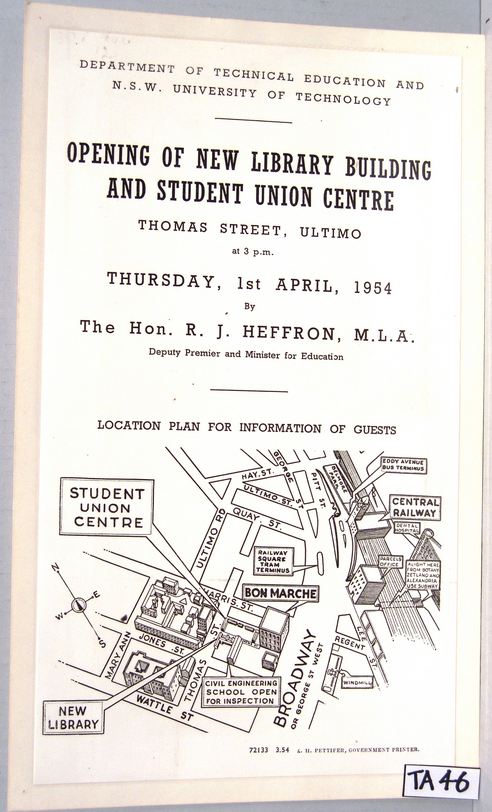