About the TAFE History Collection 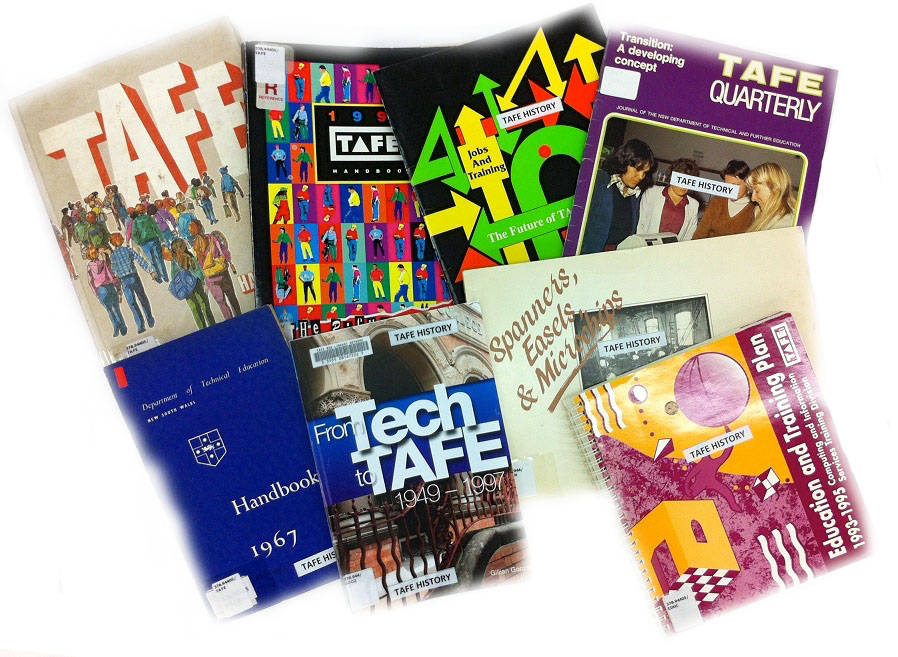 The TAFE History Collection is managed by Ultimo Library for the purpose of preserving the ongoing history of TAFE NSW. It contains material in the form of books, journals, reports, published histories, handbooks, statistical publications and more.

How do you search for resources held in the TAFE History Collection?

Enter your keywords or terms in the search box below, e.g. TAFE Handbook, and then click the Search button.

Please note, the TAFE History Collection at Ultimo Library is not intended to be comprehensive. For other TAFE NSW historical resources that are publicly available, please search Trove.

A selection of items can be browsed based on the following topics:

Please note, the TAFE History Collection at Ultimo Library is not intended to be comprehensive. For other TAFE NSW historical resources that are publicly available, please search Trove.

To suggest a topic or to seek further guidance about the TAFE History Collection, please contact Ultimo Library.

Trove is a repository of full-text digital material and records relating to Australia. The content comes from libraries, museums, archives and other research organisations.

For TAFE NSW historical resources, Trove draws content mostly from the National Library of Australia, State Library of New South Wales and Powerhouse Museum collections. If you find a specific resource you wish to use, follow the link from Trove to the website of the organisation. 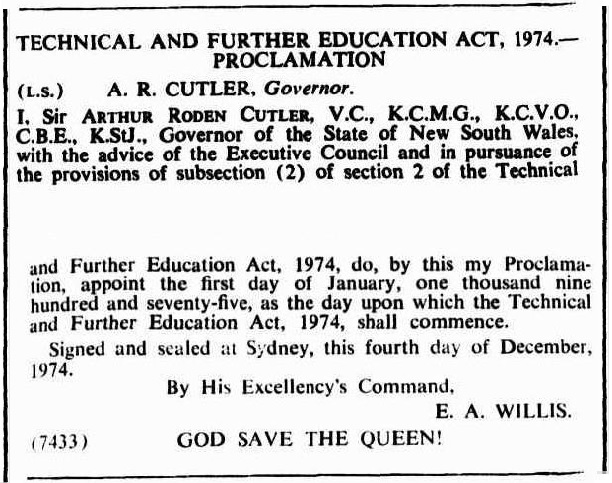 The NSW Government Gazette has been digitised by the State Library of New South Wales, in partnership with the National Library of Australia. From 1832 to 2001, the records are freely available online via Trove.

Government Gazettes are the official publication of notices about the decisions and actions of the New South Wales Government.

The NSW Government Gazette may be an important source of TAFE history information.

Trace the history of VET in Australia

History of VET
For a more comprehensive overview of Australia's VET story, the History of VET is now available online.

With an extensive reading list and a number of timelines covering topics such as TAFE history, historical milestones, Australian VET ministers, and VET legislation, the History of VET page draws all of the key pieces of information together.

If you need further assistance on your research requirements, please contact Ultimo Library.

Featured Items from the Collection

A main source of historical information on TAFE, the Library holds a number of Annual Reports, including the 'Report on technical education by the Minister for Public Instruction'. This Report is held in the TAFE History Collection, 1884 - (incomplete holdings).

Browse all Annual Reports held in the TAFE History Collection. 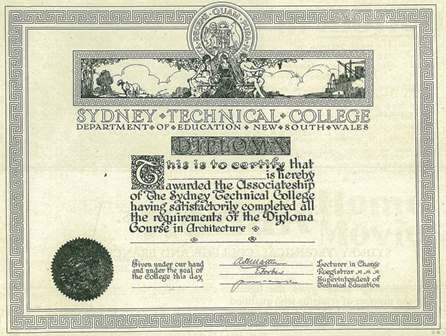 Did you know TAFE NSW (formerly Sydney Technical College) has been offering higher education courses since 1892? Students who completed professional level, five year diploma courses were awarded the Associateship of Sydney Technical College (ASTC). The Associateship has been a highly regarded award among many professions, especially architecture and engineering. The TAFE Handbook and the Technical Gazette lists the names of people who were awarded the ASTC (it ceased in 1976). Like in the past, TAFE NSW continues to offer higher education courses and degree programs well into the 21st century - check our website for more information. 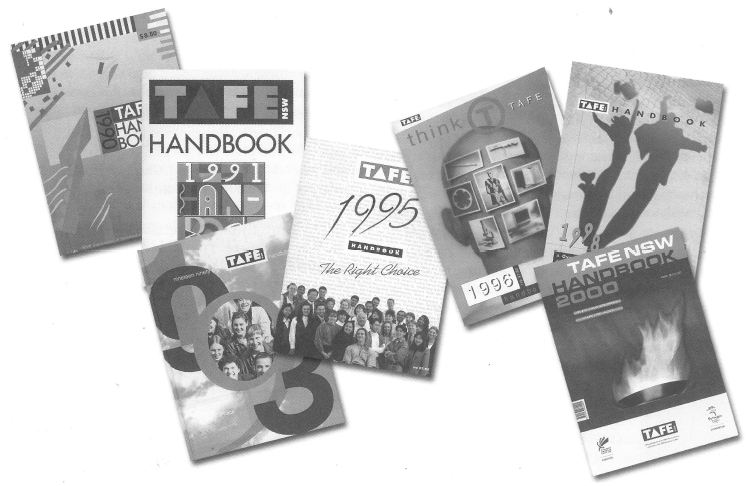 TAFE Handbooks (originally called Calendars) were published each year and contain a wealth of information relating to course requirements and description of courses and subjects within each department. Information contained in the early handbooks is organised as follows:

The Technical Gazette of New South Wales was published by the Department of Public Instruction from 1911 to 1941. The early Gazettes were aimed primarily at students as well as staff.

“The main purpose of the “Gazette” will be to help the student and to accompany him with assistance suitable to his peculiar needs as he proceeds through his course.”

During this period, the Gazette contained articles on trades relevant to courses offered by Sydney Technical College, other colleges and schools. The detailed articles and wonderful reproductions of students work were contributed by various departments, such as Architecture and Building Trades, Science department, Engineering, Printing and Allied Trades and Women’s industries, even the Technological Museum (now called the Powerhouse Museum). 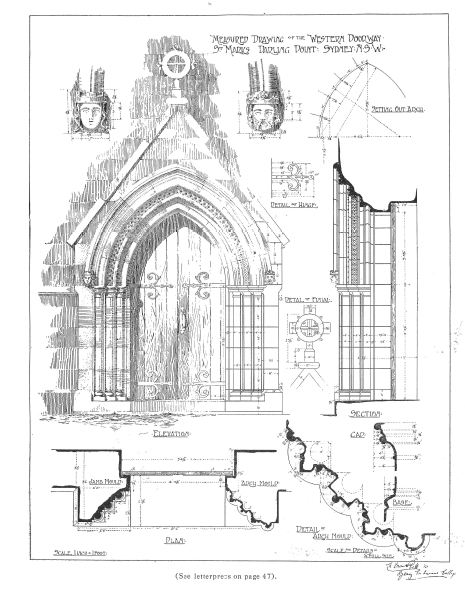 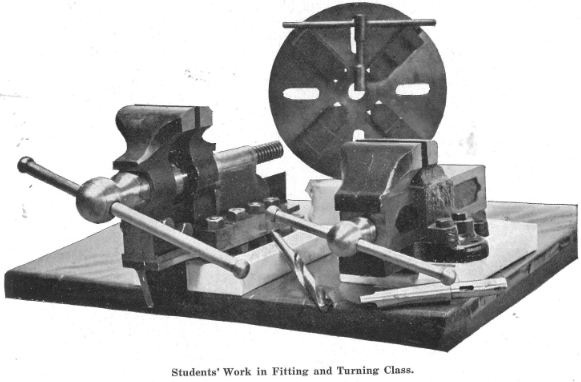 The TAFE History Collection holds hardcopy of the Technical Gazette of New South Wales from 1911-1941 (incomplete holdings) – check below for details.

The later Gazettes, known as the TAFE Gazette, dating from 1981, contain notices aimed at staff only. The notices cover personnel notices, such as appointments and retirements; general notices, such as amendments to acts and regulations relating to TAFE NSW; new, revised and withdrawn courses; and employment vacancies. The last paper based version of the TAFE Gazette was published on 22 February 2012.

The TAFE History Collection holds hardcopy of the TAFE Gazette from 1988 to 2012 (incomplete holdings) - check below for details.